Maker Coins- these are the 3D-printed, personalized “coins” that are hard to imagine the maker scene without. They are suitable for the entrance into the 3D design and printing world, function as a kind of business card and are given away gladly among themselves.

Maker Angus Deveson, better known in the scene as Maker’s Muse, who gives Youtube tutorials, has a 3D print shop on Amazon and a page for fans and backers on Patreon, came up with the idea of making a coin-like object. He needed a suitable small-format 3D model to test and compare the filament samples given away by the manufacturers. Since the samples do not yield too much material, he designed a wristwatch large piece, which reminds of a coin-shaped badge. He called his work “Maker Coin” and this coin is already so well established in the community that there are many different makes and 3D models of it.

Here is a Selection of Creative Maker Coins for Inspiration, Remixing and Printing:

Naomi “SexyCyborg” Wu used a Flashforge Creator Pro to print this self-designed Chinese maker coin. The lettering on it is an old, large seal font version of zuò (作) and what you see printed here means “make”, as you might expect. She printed the coin with a bronze-filled filament, then finished the result with stainless steel pens and steel wool for some time, then polished the maker coin.”SexyCyborg” recommends wearing good working gloves during this process. 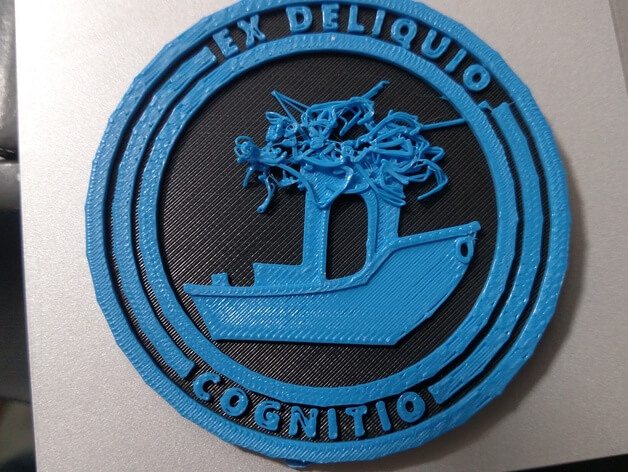 “Ex Deliquio, Cognitio”, “From Failure Comes Knowledge”. This motto “VickyTGAW” has taken to heart, because every maker knows that prints don’t always go the way you want them to. The coin stands, so to speak, as a symbol for the path of experience in 3D printing. It shows the outline of the well-known 3D ship Benchy, with which one often starts. However, this is not perfectly finished, but it is crowned with a chaos of spaghetti filament. 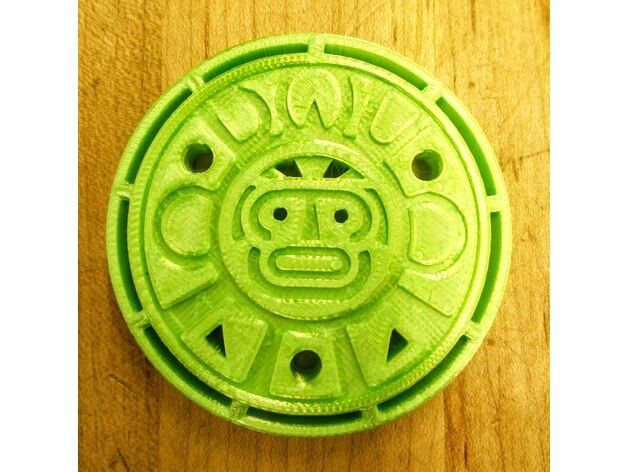 Maker “adou” also made a Maker Coin to test the features of his 3D printer. The coin is 1.5 cm wide, has a diameter of 6 cm and is a slimmed down version of the Mayan calendar. The 3D model is a good example of the many different ways to give your coin an individual touch: At first glance you may not notice it, but “adou” has his last name immortalized at the top in the middle. 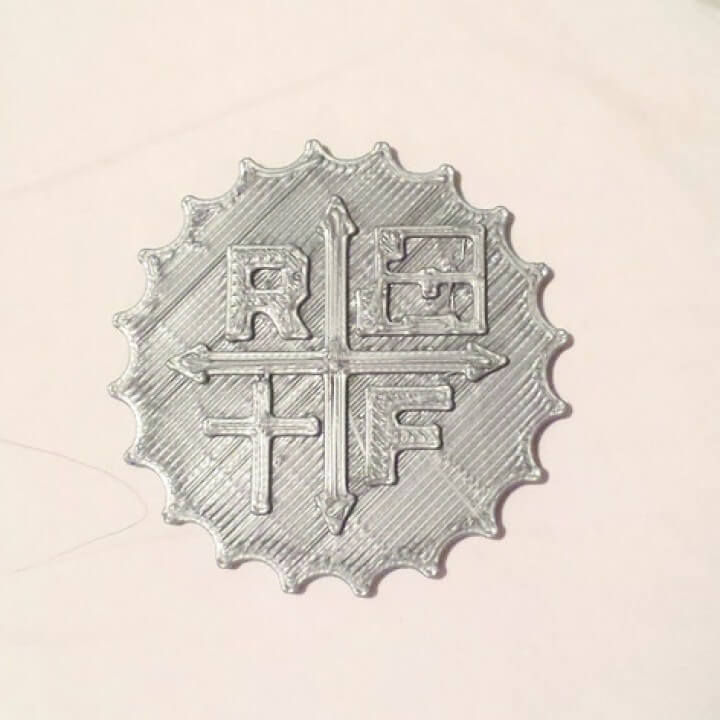 There’s a lot to discover on this coin: “RF” are the initials of the MyMiniFactory account “ReginaFabricam” from Tia Bertz. The 3D printer icon represents her Lulzbot TAZ. The large cross that extends across the entire coin is the X and Y axis that form the basis of 3D printing, and the small cross represents Tia Bertz’ first 3D design ever. 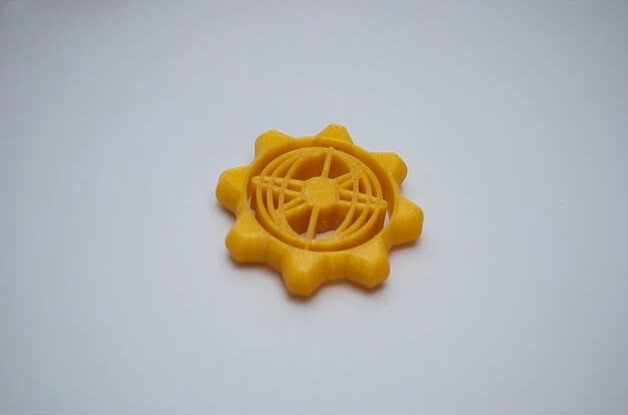 Maker “MidHeavenTech” decided to turn his logo not only into a Maker Coin, but also into a Fidget Spinner. The idea is that people who haven’t been exposed to 3D printing before can hold a 3D-printed result in their hands and have fun playing, but are also encouraged to think about 3D printing. By the way: The more you play with the coin, the smoother it becomes and the more it turns. 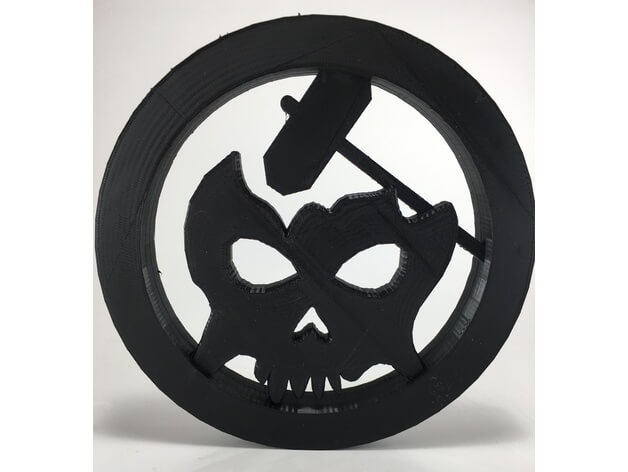 Such a logo will certainly be remembered! 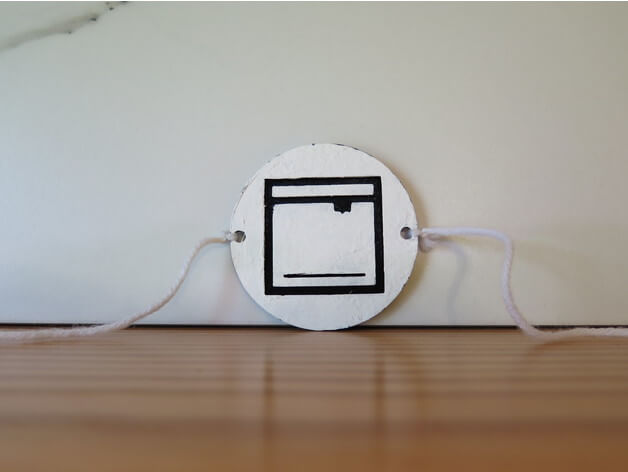 That’s right! It is clever to provide a Maker Coin with a bracelet function at the same time. But wait! You can do something else with it, namely use it as a Thaumatrop! It’s like this: This little bird is printed on the back: 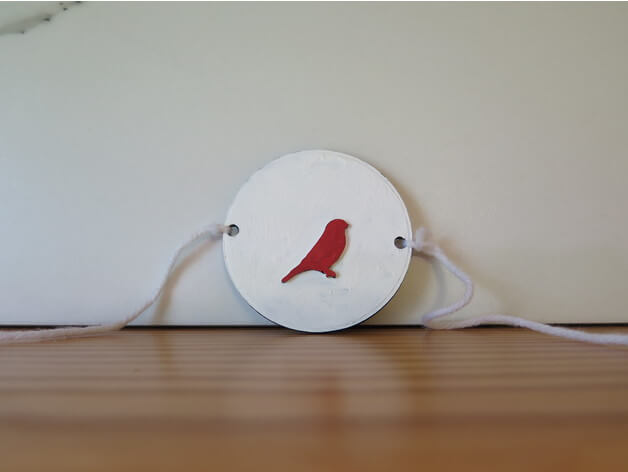 If you now twist in the two threads and let them untwist quickly while pulling, an optical illusion is created and the bird lands suddenly in the 3D printer!