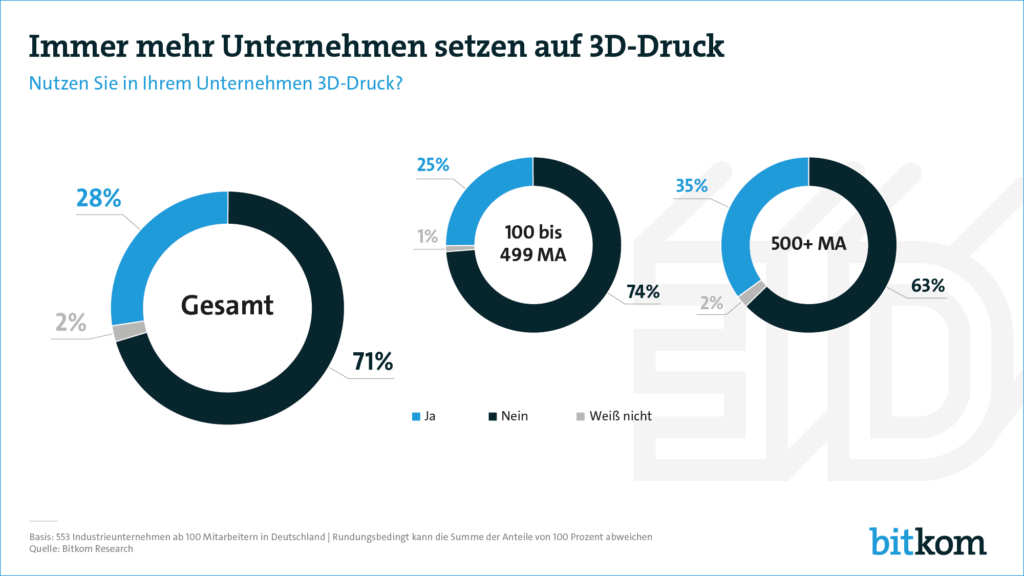 More than one in four German industrial companies, or 28 percent, already use 3D printers. This is the result of a representative survey of 553 manufacturing companies with 100 or more employees on behalf of the digital associacion Bitkom. That is 8 percentage points more than in 2016, when it was just 20 percent.

“3D printing technology is a stroke of luck for Germany as a strong and innovative industrial location. The technology offers a unique opportunity to bring back to Germany value added that has migrated to low-wage countries. Companies use digital technologies to accelerate product development and optimize manufacturing processes. 3D printing is an innovation accelerator and increases competitiveness.”

The Usage of 3D Printing

Specifically, one in three industrial companies uses 3D printing primarily to produce samples, molds or tools (34 percent) and to manufacture spare parts (32 percent). Almost one in four (23 percent) use it to create visual models, 12 percent use it to produce functional models for testing. Less common is the production of assembly devices or custom-made products (8 percent each) in 3D printing.

In the medium to long term, 3D printing could have a significant impact on current production processes, business models and value chains in certain areas. Seven out of ten companies (70 percent) say that 3D printing will disruptively, i.e. profoundly, change the industry. One in two of these companies (49 percent) expects the disruptive changes to occur within the next ten years. 48 percent of them estimate that it will take more than a decade. Only ten percent of all companies do not attribute any disruptive potential to 3D printing, 17 percent consider it rather unlikely that 3D printing has a disruptive effect. Berg: